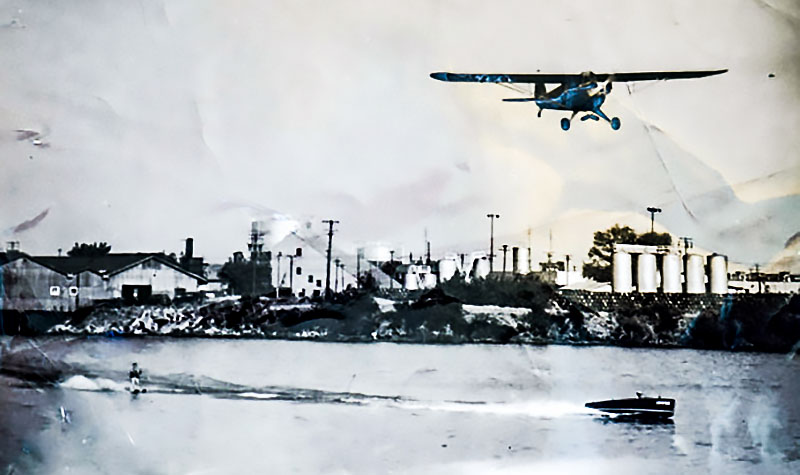 It’s probably impossible to identify the craziest thing ever done on the Delta, but “Ni” Orsi, Jr. has a contender: his father water skied behind an airplane.

The year – he’s not sure – was between 1944 and ’46. The place was the turning basin, the 970-foot-wide bulge in the Deep Water Channel where ships leaving the Port of Stockton turn around.

The main actors were Orsi’s father, Annibale “Ni” Orsi Sr., a Stockton baker and water ski pioneer, and his friend Cham Mills, who had been a B-24 bomber pilot in World War II.

The image you have of this stunt is probably one of a pontoon plane taking off from the water and pulling the skier along with it. That’s an edgy stunt in its own right. Back then planes at their slowest traveled significantly faster than ski boats at their fastest.

That’s not what they did.

The airplane Mills borrowed, a Piper Cub, had no pontoons. So Orsi’s stunt involved getting up to speed behind a speedboat, then, as the airplane flew overhead, dropping the boat rope and grabbing the rope trailing from the plane, all the while staying up on skis.

“I can think of all kind of reasons why it was absolutely insane,” Orsi Jr. said.

First, the boat’s top speed was 38 mph, while the plane could slow only to 48 to 50 mph before stalling – not that the pilot would cut it that close. So there was around a 15 mph speed differential. It yanked Orsi right out of his skis the first two times they tried it.

Second, since the plane was travelling just above its stall speed, no one knew if the sudden drag from pulling Orsi’s weight would cause the plane to fall out of the sky. Without pontoons, the boat’s landing would be in the crawdad’s living room.

“Now what?” Orsi Jr. asked rhetorically. “Down comes the plane. No wonder it was against the law.”

It is also a case study in the sort of adrenaline junkies to whom you should never to loan your airplane.

Nevertheless, on the third try, they pulled it off. Orsi went ripping across the turning basin as the jaws of fishermen and other onlookers undoubtedly dropped and photographer Hubert Miller captured the image for posterity.

Editor’s Note:  The photographs have faded over the decades since they were made and some editing was done to enhance their reproduction here.

Michael Fitzgerald is an award-winning columnist who recently retired after 33 years at The Stockton Record. Reach him at michaelleofitzgerald209@gmail.com.

PrevPreviousThe Final Hunt is Only the Start
NextWater Wars ContinueNext