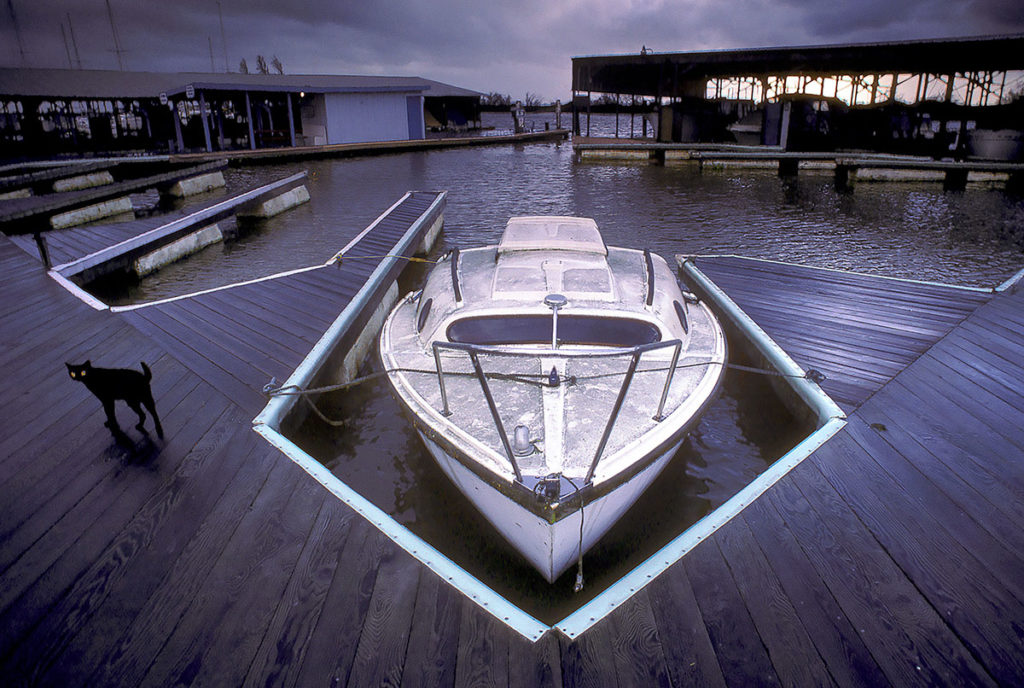 This is a case of following one of my self-imposed rules. A rule that has been so good for me that I had it pasted to the top of my monitor for many years. HONOR SERENDIPITY.

While out enjoying the quietude that was the result of a passing storm, I happened upon this composition at a marina on the Mokelumne River in the California Delta. Many different elements of this scene drew me to it, however the cat was not initially one of them.

As I was excitedly working fast to get a good shot before the quickly moving clouds opened up to blue sky, I felt a friendly nudge at my ankles. Looking down, I was actually annoyed at this friendly little critter because I was more intent on the scene while juggling exposures and holding my breath because I was shooting Kodachrome 64. In the dim, breaking light of early morning that meant slow shutter speeds and no tripod anywhere handy. The tripod would have been useless anyway because of the rocking motion of the dock.

As I was just about ready to bag the camera, the cat, bored with my seeming indifference, realized no treats were coming from the stranger on the dock and walked away.  Click, one last shot.

Out of about 15 or 20 frames of film, all pretty good compositions if I may say so, this was THE one. But I didn’t know that until the film was processed.

Editor’s note:  Writers, photographers, and artists, this is your invitation to submit your Short Take that gives us a peek into your world. Email rich@soundingsmag.net with 300 words or so and one or two photographs for possible publication.