Peregrines in the City

Since the appearance of Peregrines at PG&E we have found nests on the Bay Bridge, on a boat moored near San Francisco Giants Oracle ballpark, on cranes along the waterfront, and across the Bay on the Campanile bell tower in the center of UC Berkeley campus.

It was cool and misty as we made our way in the early morning along a ridge above the beach. The wet grass soaked our pants to the knees. We were atop a sandstone cliff at Point Reyes to band nestling Peregrine Falcons.

Peregrines nest in some of the best places, usually geologic structures that dominate the landscape like Big Sur, Morro Rock, or El Capitan. The bird is an avian predator that eats birds that are caught in the air: at least 256 different species of birds in California. Nesting in the high places of the world gives it an advantage over prey that is taken in aerial dives that often exceed 200 miles per hour.

Not far away, a Peregrine stood watching the deployment of ropes that would secure us during chick banding on the nest ledge about sixty feet down. We tied the ropes to stakes pounded into the sandy soil as the Peregrine’s wail of objection was the only sound aside from the ocean’s lapping waves. It defined the wildness of the place.

It was not that long ago that Peregrines were absent from these cliffs and other traditional nest locations around the world. Prolific use of DDT and related toxins poisoned the Peregrine’s food causing them to lay thin-shelled eggs resulting in a population crash. Just two pairs of the birds were found in California during a statewide survey in 1970 and none were found east of the Mississippi River.

The presence of the pair at our ocean overlook was made possible by two factors. First, DDT was banned by the Environmental Protection Agency in 1972, and second, the Endangered Species Act was passed by Congress the very next year creating a framework for population recovery work benefitting the Peregrine and many other species.

Cornell University, soon followed by UC Santa Cruz, initiated aggressive population recovery work in the 1970s that kept Peregrines in the air while environmental toxins dissipated. Over the next few decades we began to see the birds more and more commonly. Then something unexpected happened: Peregrines began to use manmade structures like harbor cranes, buildings, and bridges as nest locations. Here, they found dominant structures overlooking an abundant food source of city pigeons. Instead of exploiting seabirds or doves in the wilderness, they snatched pigeons from the concrete canyons of San Francisco’s financial district and other urban centers.

Peregrines are staunchly territorial so there are never many in one particular place. If we measure distances between nesting pairs around the San Francisco Bay we find a pair every two or three or four miles which is a lot in the world of Peregrines.

The Pacific Gas and Electric Company headquarters building at the corner of Market and Beale Streets in the financial district hosts the most long-standing and well-known Central California pair. The company sponsored a nest camera beginning in 2005 to acquaint the community and viewers throughout the world with the home life of Peregrines.

In the early days of the nest camera hundreds of people crowded onto the Drumm Street pedestrian bridge and used spotting scopes and binoculars to watch as young falcons made their first flights from the 33rd floor of the PG&E tower. People watched the birds on computer screens in homes and offices, then came to Drumm Street to see the Peregrines live. Then they bought scopes and binoculars and many became birders thanks to the appearance of Peregrines in San Francisco.

Since the appearance of Peregrines at PG&E we have found nests on the Bay Bridge, on a boat moored near San Francisco Giants Oracle ballpark, on cranes along the waterfront, and across the Bay on the Campanile bell tower in the center of UC Berkeley campus. They now use almost every major commuter bridge in the Bay Area and a railroad drawbridge alongside Fruitvale Avenue between Oakland and Alameda. They are on the 19th story ledge of San Jose City Hall and in a purloined cormorant nest on a power transmission tower at Don Edwards Refuge. They have used a ledge on the side of the massive wind tunnel at NASA-Ames research center and a towering freeway abutment on San Francisco Peninsula.

But one of the most surprising nest locations is above the Sacramento River on the Highway 12 drawbridge at Rio Vista. The bridge has two, ten story tall towers that house the drawbridge counterweights on each side of the span that raises allowing ships to pass. The concrete counterweights are the size of a house and make hoisting the span possible. For several years Peregrine Falcons have been nesting on one of the counterweights! This means that they incubate eggs and then raise babies for a total of eleven weeks all the while the counterweight raises and lowers approximately 50 times per month.

We have to ask ourselves why this icon of wildness would submit to nesting in such odd, noisy, locations that are utterly disturbed by human beings. A bird’s first consideration is the availability of food. Food is the reason birds migrate and food is the reason they choose nesting territories. When a falcon is up high–say on the 33rd floor of the PG&E building–they could care less if there are sirens blaring, cars honking, and people walking to lunch down below if their aerial environment is well-stocked with birds.

We learned that Peregrines ate 256 different species of birds in California by collecting and identifying  the prey remains found in nests we entered during population recovery work. Urban centers with tall structures and abundant pigeons are like ecological magnets to Peregrines very much to the delight of office and apartment dwellers. They use the structures for nesting and they eat the pigeons. It was an attorney with a high window view of PG&E headquarters who first alerted researchers to the presence of Peregrines in the financial district.

The 1970s brought a renaissance of environmental protection. The Environmental Protection Agency was formed and a host of laws were passed—the Clean Air Act, Clean Water Act, National Environmental Protection Act—in addition to the Endangered Species Act. At the time, most people thought it was the right thing to do. Today, we reap the benefits of those laws with the return of Peregrines, Bald Eagles, Ospreys, and other species. Judging by the scene at the Drumm Street Bridge, it is a wonderful thing to see a Peregrine cutting across the sky or to have the wailing cry of a Peregrine distract us from the business of urban life. Looking up, we can be transported to the wild by an extraordinary creature that thrives in our midst. 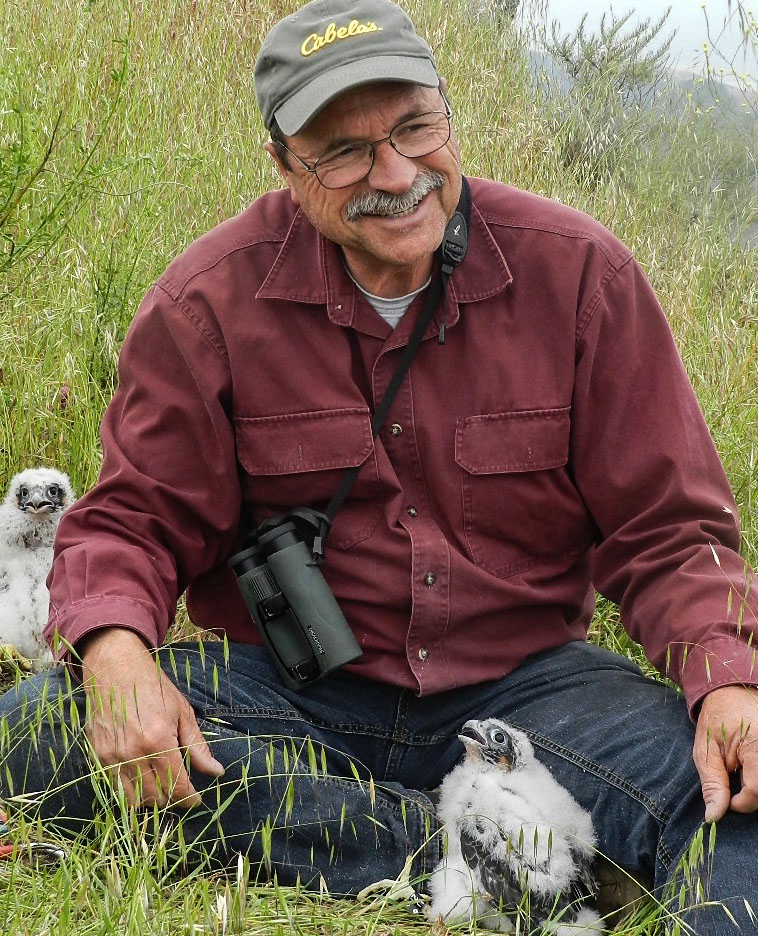 Glenn R. Stewart is the retired director of the University of California Santa Cruz Predatory Bird Research Group and author of “Eye to Eye with Eagles, Hawks, and Falcons.” He teaches at the University, lives in Santa Cruz, and travels to Idaho and Montana during fall and winter to fly his falconry birds.