There is something about mixing—fresh and salt, old and new, east and west—that keeps our souls keen. I have been steeped in the coast of my California home, learning the life of its seaweeds for a decade, yet it is waking in my tiny house on the end of a dock here in coastal Maine, that refreshes my eyes and ears and opens me up to possibility.

The tide is the first thing I notice each morning; is it high or low? The new growth on the tips of the Ascophyllum nodosum, the ubiquitous but much haggled over rockweed that covers the shores of Penobscot Bay, Maine, also stands out, freshly golden in color, much like fresh green pine tips of new growth in the forest.

I have a foot on both coasts—left and right. I have also been mixing then and now in my artwork; I have been overlaying my contemporary scans of seaweed onto historical lithographs that accompanied the original taxonomic descriptions. This mixing of old and new creates a vector of sorts, from past to present, that extends beyond the now into some unknown future. What will be the state of our seaweeds and kelps, the foundational organism of our beloved coastlines, in another hundred years? These composite images have been the driver, the impetus for my research into the lineage of learning about our Pacific Coast marine flora. This research has aggregated into my newest book titled, The Curious World of Seaweed.

One of the scientists that figure throughout the book is a polymath named E. Yale Dawson. He was a Californian through and through, born in eastern Los Angeles, a product of  UCBerkeley and Stanford and employed by various southern California institutions. He was a prolific author on the seaweeds of our Pacific Coast. He wrote technical papers, parsing taxonomic intricacies of seaweed species, but Dawson also wrote and illustrated pamphlets and booklets for the visitor to the coast with titles like How to Know the Seaweeds as well as other general interest books on natural history. Dawson died tragically in 1966 at the age of 46 while diving in the Red Sea along the coast of Egypt. He had just taken a job at the Smithsonian in Washington DC so his papers are archived there, neatly organized in twenty boxes with an old AAA map of the Baja Peninsula rolled up alongside, marked with notes chronicling an epic seaweed collecting journey there. I had spent time with this archive a few years ago when writing my book. But last month I returned to the quiet Smithsonian Archives to revisit the white boxes full of E. Yale Dawson’s papers. I had come to admire him so intensely over the making of my book, I wanted to dig deeper into his letters. I had read his remarkable correspondence with the spitfire phycologist Isabella Abbott, and the poignant letters with his father, but I discovered new connections this go round amongst the voluminous typewritten and handwritten letters. As I was about to finish up for the day I noticed I had marked the ‘M’ box for review and giving a quick glance inside noticed a folder of correspondence with ‘Marine Colloids.’ I had to stay a bit longer.

Marine Colloids is the original name of a seaweed factory in Rockland, Maine that has since been bought by larger and larger enterprises culminating in its current ownership by the Dow/DuPont industrial behemoth. It is the last functioning seaweed processing plant on US soil after its compatriot on the west coast, Kelco of San Diego, shuttered in 2000. The Rockland facility’s life was begun in 1939 owing to the enterprise of two Italian brothers. The factory sits on a promontory that juts into the harbor adjacent to the Maine State Ferry Service terminal. This anonymous (no exterior indication of its ownership has ever been visible in my remembered lifetime) but smelly factory has been an olfactory marker of the ferry ride from Rockland to Vinalhaven for the fifty-seven years I have been making the 7-mile journey. I had researched its origins while making my first book on seaweed and wrote a long but unpublished article about it titled “The Pudding Boys,” a reference to the chemists working with carrageenan and other seaweed derivatives that make puddings gel, and emulsify and bind our processed American foods—think cheese spreads, processed meats, ice cream, lipstick and many other things. This factory’s story pops up again in The Curious World of Seaweed so the name Nick Pellicani was familiar to me as one of the two founding brothers of Marine Colloids. There in the M box was a thick sachet of typed letters back and forth between Rockland, Maine, often in the deepest freeze of winter to sunny southern California; from Nick, on seahorse embellished Marine Colloids letterhead and EYD’s typed replies on plain onion skin.

The correspondence is dated from 1957 to 1965 and includes references to visits by Nick P. to Yale Dawson’s home in Southern California with his wife Maxine and two daughters. Nick was clearly entranced by the inviting California weather. But what he was after was its seaweeds. In polite letter after letter, Nick beseeches Dawson to find new sources of red seaweed for his carrageenan extraction process. He was especially interested in the harvesting potential of seaweeds in Mexico along the Sea of Cortez, an area of specialty to Yale Dawson who wrote his PhD dissertation on the flora of the Gulf of California. Marine Colloid’s local source of carrageenan, the native Irish moss of the north Atlantic (Chondrus cripsus), could not keep up with demand.  The processed food culture of the early 1960’s was exploding. The Pudding Boys working in the Rockland factory had Betty Crocker, Unilever, Kraft and other food giants demanding more and varied smoothers, binders, emulsifiers.Interspersed among the letters from Rockland Maine to Solvang, California are industry newsletters with turquoise titles like SeaKem Extracts and Colloid-O-Scope. Articles explain the wonders of carrageenan products for binding dairy proteins, list seaweed terminology, include pictures of kids drinking chocolate milk and show the chemical diagram of the cell wall derivatives—the phycocolloids—which is the stuff that keeps seaweeds goopy. The pace of the conversation for us today, is painfully slow. It extends from 1957 to 1965, a year before Dawson was drowned in the Red Sea. Nick Pellicani asks questions like, “can widespread harvesting affect the overall supply?” and Dawson in turn continually sends samples of seaweeds, or the contacts for people who can, from Mexico, Peru, the Philippines and even Puget Sound to the East Coast to be analyzed for their colloidal content.

But the last thing in the file—the ‘M’ file of box 10 of 20 in the archives of the thoroughly Californian man, with a childhood obsession with cacti, who studied under the famous grandfather of pacific Coast marine botany, taught at USC in Los Angeles and was one of the first to use SCUBA to explore coastal waters of California in search of new species of seaweed to name—is a picture of the seaweed factory in Rockland, Maine, taken from the air in about 1960. It is the same seaweed plant that stands today, not yet painted clean white but familiar all the same except its original name – Marine Colloids—is on the front façade, complete with the seahorse logo between the two words.  Looking closely at the 8×10 black and white photograph, I notice a ferry boat, white against the dark empty harbor, passing behind the factory, heading out towards Penobscot Bay and the island of Vinalhaven beyond. The form and size of that ferry is emblazoned on my memory and is instantly recognizable as the Everett Libby, the first ferry commissioned by the newly formed Maine State Ferry Service in 1960. The excitement as a child, of getting from Manhattan all the way to the remote outpost of Rockland and then getting on the ferry, meant we were almost there.

A weird conflation of then and now, here and there, East and West happened last month as I arrived at the ferry terminal in Rockland to finally make my way across the bay to my home (my second home) on Vinalhaven after too many weeks on the road. My East Coast sojourn on trains and buses and rental cars had taken me from Cambridge Mass to New York to Washington DC back to New York then up through Maine to Saint Andrews, Canada, so as I returned to Rockland I was anxious to make the 2:45 afternoon ferry and finally unpack my bags and rest for a couple of days before family arrived. As I drove onto the ferry something was different; the scale was wrong and yet familiar. I was in fact driving onto the Everett Libby, the original ten-car ferry pulled back into service while the larger more contemporary ferries were being inspected and restored. As we pulled out and slowly rounded the corner created by the seaweed factory I felt like I was, quite literally, in the photograph I had inspected so carefully the week before in the archives in Washington DC. E. Yale Dawson was in my thoughts as someone who loved the ocean so intensively and tried to communicate that love to many others. He was a Pacific Ocean guy through and through but I felt connected to him here, traversing this piece of the Atlantic. 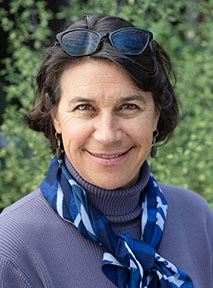 Josie Iselin is the photographer, author and designer of many books exploring our coastal universe. Her new book, The Curious World of Seaweed, is an ambitious combination of essays and historical as well as contemporary imagery that explores the world just beyond the beach. Josie holds a BA in visual and environmental studies from Harvard and an MFA from San Francisco State University. For over twenty-five years she has used her flatbed scanner and computer for generating imagery. Iselin exhibits large-scale fine art prints at select galleries and museums, advocates for ocean health through education and speaks widely on the confluence of art and science.