It’s All About the Wind

Summer Fire Risk in Cities by the Bay 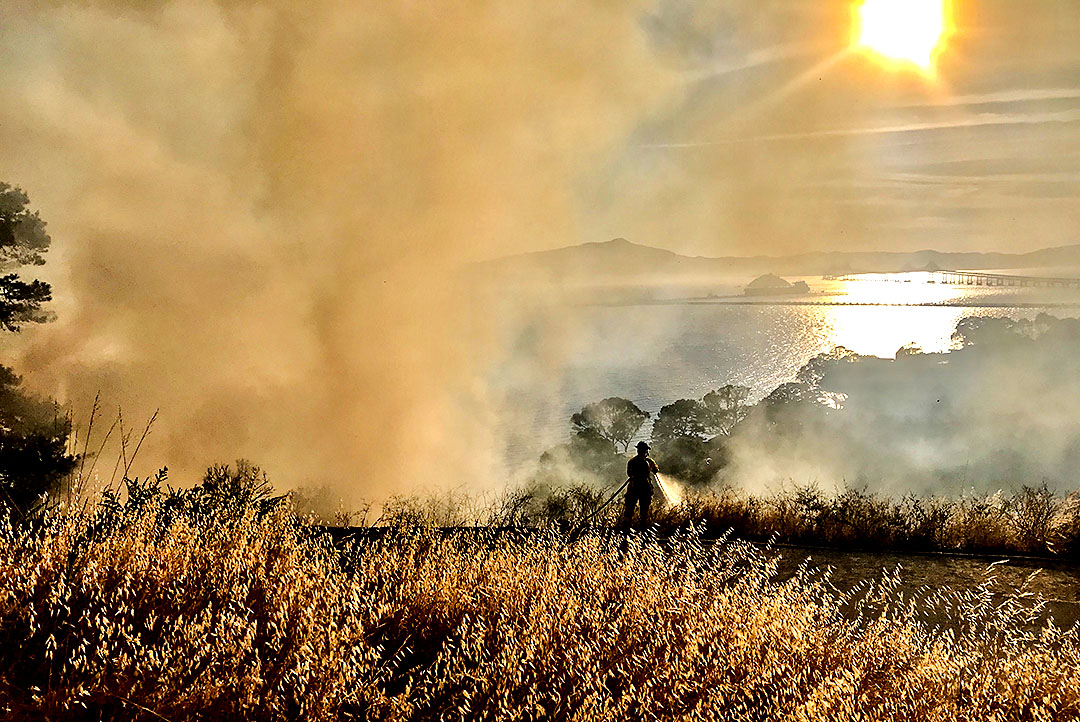 No more water, the fire next time…”

The week before Independence Day, I set out for a late afternoon walk in the hills behind my house.

Point Richmond, a woodsy extension of the city of Richmond, in Western Contra Costa County, leans out into the San Francisco Bay, just south of the Richmond-San Rafael Bridge. Private homes cling to a cluster of bedrock hills looking out on the everchanging panorama of the Bay, including Angel Island and the mountains of Marin. Boat owners and other people who love the water –- even just to paint or photograph it – gravitate to this town. The presence of water from every viewpoint refreshes and soothes us, as residents of a state so vulnerable to fire.

The town is flanked by Miller-Knox Regional Shoreline, one of the East Bay parks, whose trails wind around a 371 foot high peak called Nicholl Knob, offering killer views of the Bay. That was where I was headed as I made my way up the rocky path, through fields of golden grass flowing in the breeze, flowering bushes, pine and eucalyptus trees. I passed two teenagers standing on the bluff as I scrambled up the trail.

I was not 30 feet past them when the firecrackers went off. Twisting back toward the source of the sound, I saw the grass ignite. The teenagers took off running. The flames spread faster than I could have ever imagined. Within minutes they had spread up the hill, consuming the easy fuel, and were leaping two to four feet high. The fire infiltrated scrubby stands of native trees, then licked the feet of large, established evergreens. Another hiker ran towards the flames, swinging his shirt, then quickly backed off. I called 911.

It took about 15 minutes for the firefighters to arrive, even though the station is just on the other side of the hill. Part of the problem was figuring out which road to take to best access the fire, guided only by frantic callers and the plumes of smoke now rising hundreds of feet into the air. By the time two fire trucks pulled up, the residents of the homes on the periphery of the park were hosing down their properties and driving their cars away. 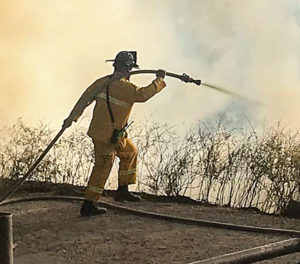 The fire fighters were not quite so hurried. They had seen these grass fires before, and despite its rapid spread, gauged it containable. The hoses came out and drenched the entire hillside. Seeing, at that point, more smoke than fire, I continued on my hike.

“People have a false sense of security living on the water’s edge,” firefighter Casey Shott told me when I stopped in at the station house the other day. “There is plenty of fire fuel around here, and the wind can come from any direction. If it comes from the east, or north east, it could burn all the way down to the bay.”

I asked about firecrackers and fireworks, whose explosions were heard more and more frequently – just about everywhere, according to social media – as we approached the 4th of July. What if someone ignites them up in the hills at night, when no hikers are around to see the fire spread?

Yes, Shott said, fireworks were a big concern, and there seemed to be more this year than usual. Again, he emphasized, day or night, “It’s all about the wind.”

We were joined by Fire Captain Mike Rodriguez. He said he was just as concerned about the inevitable injuries sustained when people set off fireworks, explaining that  “We are first responders and it consumes our resources.”

Statewide, many types of fireworks are illegal, including firecrackers. Some counties permit those on a list deemed “safe and sane.” Contra Costa County is not one of them. (Solano County is). But that did not stop people from purchasing them illegally. Captain Rodriguez said that county firefighters were preparing for an expected surge in fireworks-related calls.

On the night of July 4, between 7 p.m. and midnight, Contra Costa firefighters responded to 67 fires, with the peak just after dark, at 9 p.m. Fireworks definitively caused 16 of them, according to the Contra Costa County Fire District (ConFire). One of the largest conflagrations was in that other East Bay city near the mouth of the Delta: Pittsburgh. With help from a number of partnering fire agencies, plus the Pittsburgh PD,  ConFire saved over 20 homes from destruction. Similar reports came in from all around the Bay.

As I write, with the 4th of July behind us, the sporadic sound of detonating fireworks can still be heard as people finish off what they apparently stockpiled. Winds here in Richmond are only 8mph SW, and the night is otherwise quiet. I don’t know who these thrill-seekers are who will risk lives and property for the sake of a loud bang, who celebrate on this holiday their “independence” from any sense of community. I don’t know how we talk to them to get them to reconsider. For now, we’ve survived another July 4th. But the rest of the summer, with its hot, dry winds, stretches before us.

Laura Paull has been writing since childhood and has yet to run out of subjects for her stories. A New Yorker by birth and Californian by choice, she is drawn to water, and when living in the Central Valley for many years would take frequent trips to explore the Delta. She now lives on the shores of Point Richmond, where she watches the hawks nesting in giant eucalyptus trees and the ever-changing waters of the Bay. Laura studied literature and creative writing at Vassar College, then Latin American Studies at Stanford University, and has traveled widely in Latin America. A full-time journalist, she seeks balance in yoga and the natural world. Laura enjoys working on stories that celebrate human achievement, illuminate the arts, or explore the mysteries of our paths through life.