The Artist, Bernard Zakheim Speculates From Beyond the Grave

I knew better than to ask him what it meant.

He wasn’t quite an alcoholic, but, by his 70s, he had retired from fresco painting and was living his days on his property, surrounded by apple trees. His drink of choice was inexpensive vodka, Russian, when he had a little extra money. Ice? No, thank you. Room temperature and poured from the jug-handled bottle into a mason jar — as fine a conveyance from the source to his gullet as any.

My grandfather was Bernard Zakheim, a Jewish artist from Warsaw, best known for his mural “The Library” in Coit Tower, San Francisco. He was among the 25 artists whose murals grace the interior walls of the iconic San Francisco landmark. Moreover, he was the lead organizer of that ambitious endeavor.

The little girl in a blue and white sailor suit (photo below) that Bernard painted into the lower left-hand corner of the mural is my mother, Ruth, Bernard’s oldest daughter. She was 12 in 1934. Today, at 98, she recalls: “I can still remember the smell of the wet plaster as it was being applied to the walls inside of Coit Tower.”

People often mistake the Coit Tower murals for the art of Diego Rivera. His influence is impossible to ignore and is to be expected, given that Bernard studied with Rivera, in Mexico, in the late 1920s. Later, Diego and Frida Kahlo periodically visited my grandfather’s home in San Francisco during the 1930s, when Rivera painted his four murals in the Bay Area. Ruth still speaks of those visits: “They were such an unforgettable couple…he, imposing with his great height and bearing, she just a slip of a woman by his side, but so distinctive looking.”

By the time my grandfather was fully on my radar, I was a teenager. I would visit for a couple of weeks at a time at the Farm Arts, as he aptly named his home in Sebastopol. I boarded a Greyhound bus at Seventh and Market Streets and headed to Santa Rosa. Zeide (the affectionate Yiddish term for grandfather) would pick me up in his ramshackle 1950 Dodge pickup truck.

The rides back to the Farm Arts were truly frightening. The rattles of that old truck were rivaled only by his driving:  Total abandon and a careening style, exacerbated by a heavy foot on the accelerator. It fit his lifestyle then. He had been married twice: the first wife committed suicide and he was separated from the second. He had two daughters from the first marriage and two sons from the second. But by the time I visited him, he was single and answered to no one. I think he viewed our time together as a cross between my education and a coming of age.

He had converted the rundown chicken coops on his farm into rickety, makeshift sleeping quarters and rented them out to college students for next to nothing. If they were female, the rent was partially bartered, if you catch my drift…

The apple trees were interspersed with a number of large wooden sculptures, some carved out of upended tree roots. Much of his art portrayed the persecution of Jews; faces and twisted bodies embellished at times by bright, colorful tiles of mosaic.  These outdoor art pieces were often mounted on old wooden stands and placed close to the electric belt-driven open circular saw blade — nearly two feet across — which he used to cut firewood. He fed a wood-burning stove on which he cooked his meals. This was great in the winter, but brutal in the summer. The circular saw looked like a medieval torture device and how he kept all ten digits was simply a miracle.

Conversations between us were a mishmash of stories of hardship, rants on the censorship of his art, and affirmations of his affection for my mother. Although, to hear her tell it, life in her early years – growing up in the Haight-Ashbury district of San Francisco – hadn’t been easy. As a child, she’d been wary of the short-fuse temper of her dominating, martyred-artist of a father. My mother remembers the relationship between her parents as being unhealthy and that she, as a result, was left alone much of the time.  Given her freedom, she would walk down to the Park Branch of the library and check out as many books as her library card allowed. She also tells of roller skating through Golden Gate Park all the way out to the Ocean Beach and back. Unheard of today, right? We’d never let a child out of our sight. But in the San Francisco of the 1920s, different sensibilities prevailed. They were simply not fueled by fear.

Besides the mural in Coit Tower, Bernard painted a number of other frescoes. He was commissioned to paint for the Alemany Health Clinic in the Cayuga neighborhood (near the Mission and Excelsior neighborhoods), the San Francisco Jewish Community Center, a post office in Rusk, Texas, and, his largest, a ten-panel set of murals, located in a circular lecture room in Toland Hall at the UC Medical Center (UCSF) on Parnassus Street abutting Sutro Forest. This collection – once described as the crown jewels of the institution – depicts the “History of Medicine in California.”

The Toland Hall murals narrate, in images, not only the history of medicine in the state of California, but also the history of its people. My grandfather was, in many ways, a man ahead of his time and he imbued his work not only with his heritage, but also his ideals of progressive politics and social activism. His art was his platform.

When asked to tell the story of medicine in California, Bernard chose to depict history with a wide lens. He portrayed powerful men of note, but he didn’t stop there. The murals also tell of Native Americans, including their knowledge of local herbs, their encounters with Europeans and alcohol, and their susceptibility to smallpox. They tell of science and superstition and access to healthcare. They include historic figures such as Dr. Lucy Wanzer, the first woman to graduate from the Western Medical Department in 1876. Also portrayed is Bridget (Biddy) Mason, an African American woman — former slave and midwife — who went on to become a nurse and a successful businesswoman. Mason was also the founder of the AME church in Los Angeles [see Op-Ed in LA Times]. Disseminated in his work are also many of the historically unnamed, the soldiers, the prostitutes, the immigrants, the poor, and the powerless. He shines a light on them, too.

Bernard frequently held strong and unpopular opinions and thus was no stranger to criticism and censorship. For decades my grandfather railed, and wrote impassioned letters, in defense of the art that was recurrently imperiled. He had planned for their longevity. Perhaps he foresaw what was to come.

Set against the current climate, with a global pandemic and uprisings advocating for social justice across the nation, it seems almost unbelievable that his prescient work is threatened once again [see NewYorkTimes article].

Toland Hall, the 100-year-old building that houses the murals, has been deemed seismically unstable. Rather than design a plan to safely conserve, remove, and store the murals until they can be reinstalled in the new building, the decision-makers at UCSF requested, in June of this year, that the descendants of Bernard Zakheim remove them at our own expense. [see article in the J. – the Jewish News of Northern California]

UCSF proposed to create digital images of the murals for future viewing and then allow these priceless works of historic art to fall to the wrecking ball. They had determined that the cost for removal and storage would be approximately eight million dollars, an amount of money that they were unwilling to spend. It makes one wonder if they had ever intended to reinstall the murals in the new building.

Conversations shifted once the General Services Administration (GSA) claimed an ownership interest. The university now plans to create a strategy to remove the murals and store them – if the cost is kept below $1.8 million dollars. To this effect, UCSF has put out a Request For Proposal (RFP) inviting contractors to respond.

We are engaged in a battle not only to save the murals from destruction, but to rescue them from obscurity in storage. I have the privilege of working with my uncle Nathan Zakheim, Bernard’s son by his second marriage, a preeminent fresco conservator in his own right, as well as a group of dedicated art and history advocates. Recently, the San Francisco Board of Supervisors proposed creating emergency landmark status for the UCSF frescoes. The Historic Preservation Commission voted unanimously in favor (7-0) to preserve them and now it will go to the Board of Supervisors for a final vote. While this is largely symbolic as the City has no jurisdiction over a state-run campus, it is clear evidence that many people and organizations acknowledge the importance of these historic murals.

I’d like to think Zeide is looking down on all of this and shaking his head. He might be thinking:  “It is all so unnecessary! If we forget where we’ve been, we’ll never know where we’re going. Destroy these narrative murals now, and future generations will be deprived of a significant part of our history.” 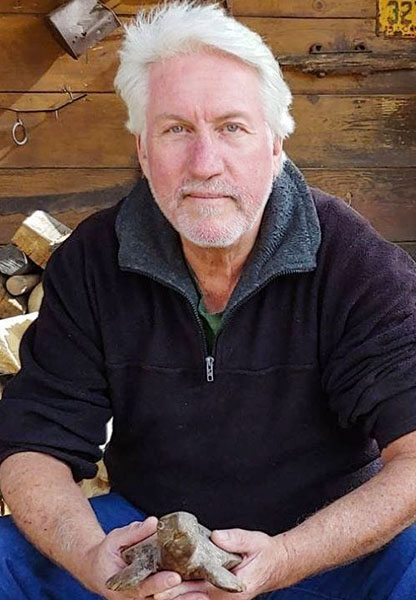 Adam Gottstein is a native of San Francisco who relocated to the Sierra Foothills in the mid 90s. Traveling back and forth between the City and a village of 100 inhabitants, the Delta was always a midway attraction. He used to keep a boat on Vieira’s Resort Island north of Rio Vista. He might again someday. Now in his 60s, writing might occupy more of his time. Contact, criticism, praise or general confabulatory discourse can start here: adamgott44@gmail.com

PrevPreviousLittle Trunk of Horrors
NextThe Delta in Times of Covid-19Next