Stimulate a Culture of Towns

The gold fever, which motivated travel to Sacramento and Stockton after 1849, began to wane by 1860 as placer mining took hold. The individual miner traveling to the gold field to pan for gold was replaced by sluice boxes and flumes. Their construction required capital and the result was rivers running red with slit. This pollution threatened the livelihood of the growing number of immigrants who left mining for farming and fishing. However, a court decision in 1884 banned the flushing of debris into California rivers and streams (2). It was an important victory for Delta farmers.

The gold rush and the genocide that followed had scattered the Miwok people living in villages along the Sacramento and San Joaquin rivers as well as their tributaries.  Only in 1916 were these native settlements consolidated and provided land by federal action as part of the Single Springs Rancheria, in the Sierra foothills and distant from the Delta. Thereafter claims to Delta lands by native inhabitants were not under discussion (3).

Delta agriculture had also been given a boost by Congressional action regarding swampy lands. In 1850, California’s swampy public lands were transferred to state jurisdiction. In 1861 California made a coordinated effort to reclaim over 2 million acres requiring drainage. However, by 1868 the initiative was abandon and the swampy lands were sold to private land owners. In the case of the Delta this resulted in the transfer of almost 300,000 acres, often to corporate interests who could afford reclamation costs.  The new land owners first employed Chinese labor to build the levees needed to drain the Delta and create islands. However, the peat soil was unstable and the levees eroded. (4)

The threat of erosion was intensified by frequent flooding. By the 1870’s some land owners were exploring the use of dredges already in use around San Francisco Bay and in Stockton. However, it was after 1880 that the invention of the clamshell bucket and the long boom resulted in Delta levees that endured. Early on land developers and associations of farmers purchased dredges but increasingly the business was conducted by contract companies. Some, like E.A Dutra Dredging, were headquartered in the Delta (Rio Vista) while the outfitting and iron works needed to build the dredges were in Stockton or the Bay region. (5)

With more land available and increasing protection against floods, Delta farming prospered given the richness of the soil. It also benefited from the growing diversity of transportation and mechanization. During the period when steamers were the primary way to get agricultural goods to market, the staples of the rancheros, cattle and wheat, continued to be the prime crops (6). However, with the advent of canneries, railroads, the Holt tractor, and finally trucks, other options could be explored. 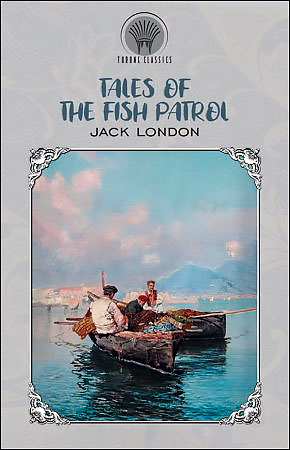 Jack London vividly describes the fish industry at the confluence of the San Joaquin and the Sacramento Rivers (7). Beginning as early as 1859 canneries allowed salmon to be stored and shipped.  By 1882, the Delta and San Francisco Bay region had 20 fish canneries.  Unfortunately, mining debris washed down the rivers during flooding first reduced the catch and then resulted in the end of the salmon canning industry altogether. Fish canneries migrated to Monterey.

However, canneries helped to make other crops like asparagus profitable. The latter part of the nineteenth century was period of agricultural experimentation. In addition to canneries, innovation was supported by transport options and the talents of the various immigrant communities. As Swagerty and Smith chronicle:

“From 1850 to 1880…Delta agriculture… concentrated on potatoes, onions, beans, and a variety of perishable green produce, marketing it locally. Cattle foraged in the swamps during summers. The establishment of irrigation districts gave farmers more options. These included growing grain, hay, and eventually many other field crops. Orchards and dairying were added after 1880. Chinese, Italian and Portuguese immigrants were identified with garden or truck farming, whereas American-born settlers tended to engage in grain, orchards, and livestock…. After 1900 the specialty crops familiar to most Californians became iconic with Delta agriculture. These included asparagus, celery, tomatoes, and sugar beets. Barley replaced wheat as the major winter grain crop, and Bartlett pears became symbolic with Sacramento River Delta prosperity.” (8) 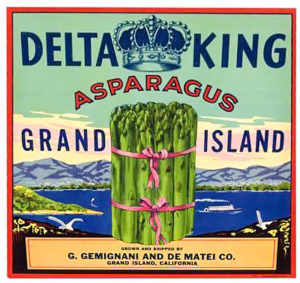 Towns developed, often from wharves, in service of the agricultural needs of the area. Soon after a town was founded, it was deemed necessary to get and hold a post office.  However, towns were first and foremost transit hubs for agricultural products, first by ship and later, in some locations, by rail. Given the swampy nature of the land, it was a challenge to lay track; in fact, a line across the southern Delta connecting Holt to both the east and west, was hailed for its remarkable innovations and success. Walnut Grove, Hood, Freeport, Clarksburg, Terminous, and Rio Vista, Pittsburg, Antioch, Benicia, Port Costa, and Crockett were, at one time or another, served by rail. The most famous rail connection was the rail “ferry” from Benicia to Port Costa which benefited both towns. (9)

Because of their dependence on transport and labor, canneries and packing sheds were located in or near towns like Collinsville, Rio Vista, Locke, Vorden, and Isleton. However, as Collinsville and Vorden testify, a cannery was not a guarantee of longevity for a town; both had failed by 1920.

The proliferation of towns during the last half of the nineteenth century were concentrated in two locations. They were established at the confluence of the Sacramento and the San Joaquin rivers, particularly on the south shore.  For example, Port Costa, Crockett. Eckley, Valona, Selby, Tormey, Rodeo, Oleum, and the larger towns of Pittsburg, Antioch, and Oakley all flourished at this time. These settlements were often dominated by a single industry or cluster of industries. Coal from the Black Diamond mines preoccupied Pittsburg, sugar refining focused Crockett, and building and paper products enriched Antioch.

At the same time, a number of towns were established up the Sacramento river, particularly on the eastern bank which made rail connections possible. The farms in the region were increasingly owned by large corporate interests who hired tenants to make the land productive.  These towns attracted diverse populations including Portuguese, Italians, Dutch, Mexican and Sikh, though Asian immigrants were particularly drawn to them. It was not uncommon for public schools to be segregated “oriental” and white. While Japanese and Filipino neighborhoods were established, the largest number of ethnic enclaves were founded by the Chinese. Such settlements prospered in Isleton, Walnut Grove, Rio Vista, Courtland (Elliott), Vordon, Paintersville, Terminous, and Holt, not to mention Locke, Stockton and Sacramento. (11)

The Chinese were early arrivals to the Delta having come from the depleted gold field and from work on the transcontinental railroad. Their arrival coincided with the need for labor to undertake the reclamation of Delta land and later they energetically embraced tenant farming. Labor brokers who organized teams of Chinese laborers found that they made most of their money providing the laborers goods and services. With tenant farm families and laborers as customers, Chinese neighborhood businesses also thrived.

The Growth of Delta Towns (13)

That these towns did not grow significantly as the 20th Century proceeded may in part be related to the introduction of the automobile and bus. The fact that the Delta was increasingly connected by roads and bridges (most ferries were replaced by 1930) to larger communities meant that workers could choose to live in Stockton or Sacramento where labor contractors recruited teams. The attraction of these larger cities for the Filipinos and the Sikhs, for example, was both social and religious. The Filipinos spoke English and enjoyed dance clubs. The Sikhs appreciated the fact that the first Sikh Temple in the United States had been formed in Stockton.

Moreover, with contracts for tenant farming limited (and in the case of Chinese and Japanese the opportunity to buy land was foreclosed), laborers had fewer reasons to live on or near the land. Only the Portuguese, the Chinese, and some Japanese had holdings that would encourage establishing permanent residence in the Delta. The Mexican immigrants, most of whom arrived during WWII, generally were seasonal workers and did not organize permanent neighborhoods. On the other hand, those families of all ethnic backgrounds who did decide to reside in the Delta, stayed for generations.

“People of many different ethnic backgrounds have worked together closely for 130 years to make the Delta into one of the state’s most productive agricultural areas. The Delta is one of the few places left in rural California where third-, fourth-, and even fifth-generation descendants of some of the early settlers continue to farm the land in a complex pattern of interaction between man and nature and between one ethnic group and another.” (15)

While small in population, less than a third of the towns (11 of 38) founded in the Delta failed to endure. They continue to provide a legacy for the people of California where small town life anchored in agriculture is on display. And, the towns came to provide a locus for two types of leisure activities – drinking and boating – into the 21st Century.

In case you missed  Robert Benedetti’s previous Soundings articles:  The Native American and Spanish Views and Visionaries and Miners Come to the Sacramento-San Joaquin Delta, 1830 to 1860

Dr. Benedetti is Professor Emeritus of Political Science, University of the Pacific and a Research Associate at the Center for California Studies, Sacramento State University. He co-directed an exploration of Sacramento-San Joaquin Delta history and culture for the Delta Protection commission in 2014-15.