Book Review: A Child Left Behind

A New Novel by Phil Hutcheon, Reviewed by Howard Lachtman 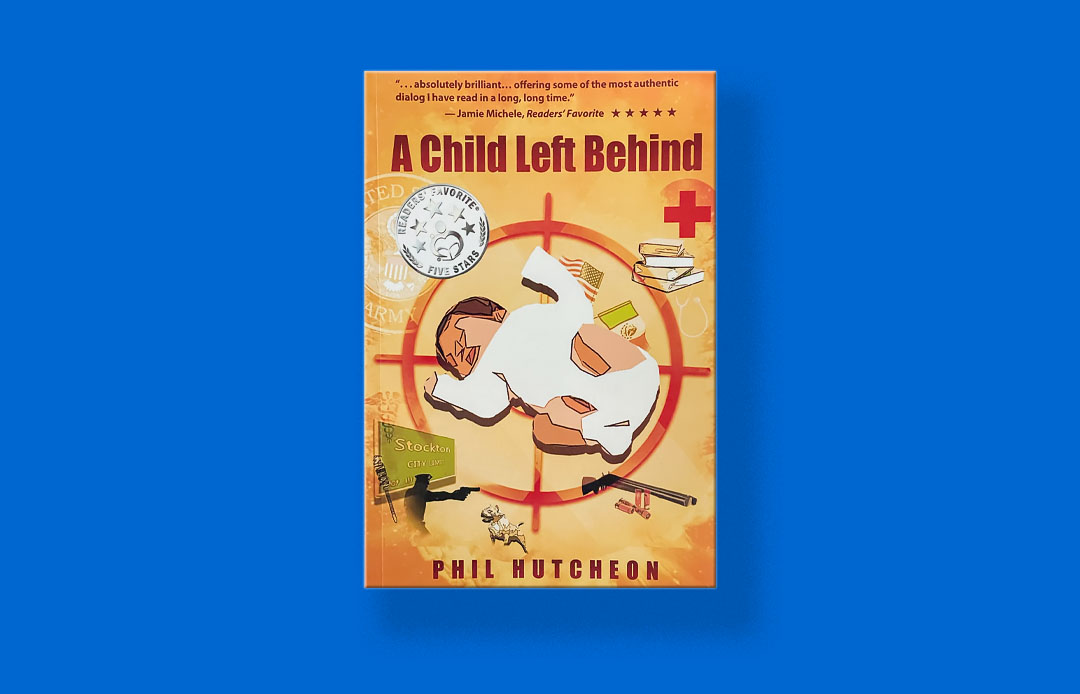 Best-known as the author of three tell-it-like-it-is sports novels including the baseball classic, “Where Triples Go to Die” (recommended by this reviewer, a long-ago amateur outfielder), and the knockdown delights of “Desperation Passes”(guaranteed to give you an understanding of football as you’ve never imagined it in the comfort of your television easy chair), Hutcheon’s new novel is filled with his trademark talent for convincing characters, no-holds-barred commentary and irreverent humor.

But this time, taking leave from the world of sport, Hutcheon embarks on an inner-city journey among a diverse collection of Stocktonians, each of whom has her or his story to tell in chapters marked by their first names.

And what a group it is! Among them are working college students, streetwise cops, a well-mannered social worker, a phone sex siren, a disgruntled professor, a hostile vet who has seen one tour of duty too many, and a randy preacher who, as the saying goes, doesn’t always practice what he preaches.

Be they strivers, sliders, goodhearts or deadbeats, Hutcheon’s diverse cast has one thing in common. All are vexed by the problem posed by an abandoned newborn and its mother (a woman of dubious morality and deplorable behavior) who touch their lives in various ways. Their varied reactions to Stockton’s newest and most unfortunate little citizen create the pattern of a novel whose milieu Hutcheon brings to life with care and craft. Characters talk in their own distinctive voices, sharing their problems and passions with you as the novel unfolds. The tales ring true and the characters come to life as Hutcheon opens the world in which they endeavor, compete and struggle.

Hutcheon’s account of locals grappling with the problem baby and problem mother comes complete with feelings laid bare and language that stops at nothing. The offbeat plot keeps you wondering what fate has in store for these people, most of whom come up short when it comes to the necessities of love or money.

Some readers will be intrigued; some will be startled; and some (such as this reviewer) may be inclined to devour the book in a single sitting. For added fun, Hutcheon provides a study guide and a personal interview in which he discloses his game plan as novelist, from concept to evolution. This added information enriches our reading and understanding of the text.

A film and writing professor at San Joaquin Delta College, noted for his efforts to encourage and promote student writing, Hutcheon is in an excellent position to observe the habits, aspirations and speech patterns of young Stocktonians. Translating them into fiction and employing the tricky technique of multiple narrators, his novel blends the private thoughts and social interactions of characters who seem to have stepped directly out of the everyday. To render that degree of realism requires a writer to have a fine eye and sensitive ear to the world about him. American novelist Henry James once advised authors to fulfill their art by being “One upon nothing is lost.” Judging by the accuracy of Hutcheon’s depictions and details, the author is one on whom little has been lost.

Where, then, does this innovative novel stand in relation to other accounts of Stockton? It was many years ago that the city gained national literary recognition from authors Maxine Hong Kingston (“The Woman Warrior”) and Leonard Gardner (“Fat City”). If you’ve wondered whether these literary landmarks have had any successor worthy of joining them on the short shelf of city classics, open “A Child Left Behind” and judge for yourself.

Before you jump into the action, heed the author’s caveat: “Champions of political correctness, of evangelism, of pit bulls, or of the intellectual titan anointed by the Electoral College in 2016 may find portions of this novel toxic.” No kidding. Hutcheon takes obvious delight in satirizing his pet peeves, including potshots at a non-imaginary celebrity referred to as “Donald Dump”. But his real achievement here is what he has captured of human nature between the covers of a book that takes care not to leave its reader behind.

The charming love story between a café waitress on the wrong end of town and a young Afghan vet trying to fit back into civilian life may lead some aficionados of the romance novel to wish that Hutcheon had made that relationship the focus of his story, perhaps to the exclusion of other elements. But it is as hard to imagine such an alternative as it is to suppose that the villainous Tyreke will repent his life of crime when he opens a window to escape his latest burglary and meets the buckshot-loaded shotgun of a grumpy grandfather who learned something about settling accounts in Vietnam.

That’s enough of a plot giveaway—and of this review.

Except to say that I have made a New Year resolution to offer Mr. Hutcheon a plot I have in mind for a novel that only he could write. It concerns a former head of state, censured and disgraced, who plots to claw his way back to power by creating a new professional hockey team composed of unstable and unethical players and their fanatical fan following. Never one to accept defeat, the defrocked megalomaniac plans to mobilize these sporting stalwarts as foot soldiers for raucous political rallies, violent protests, and a shot at a Capitol coup d’etat led by a shirtless goalie in a Viking helmet.

The team, adopting a sneaky wildcat for its mascot, is called The Cheetahs.

Any resemblance to a former chief executive, better known to his critics as the Commander In Cheat, is strictly coincidental.