A New Collection of Short Stories by Manuel Comacho, Reviewed by Phil Hutcheon 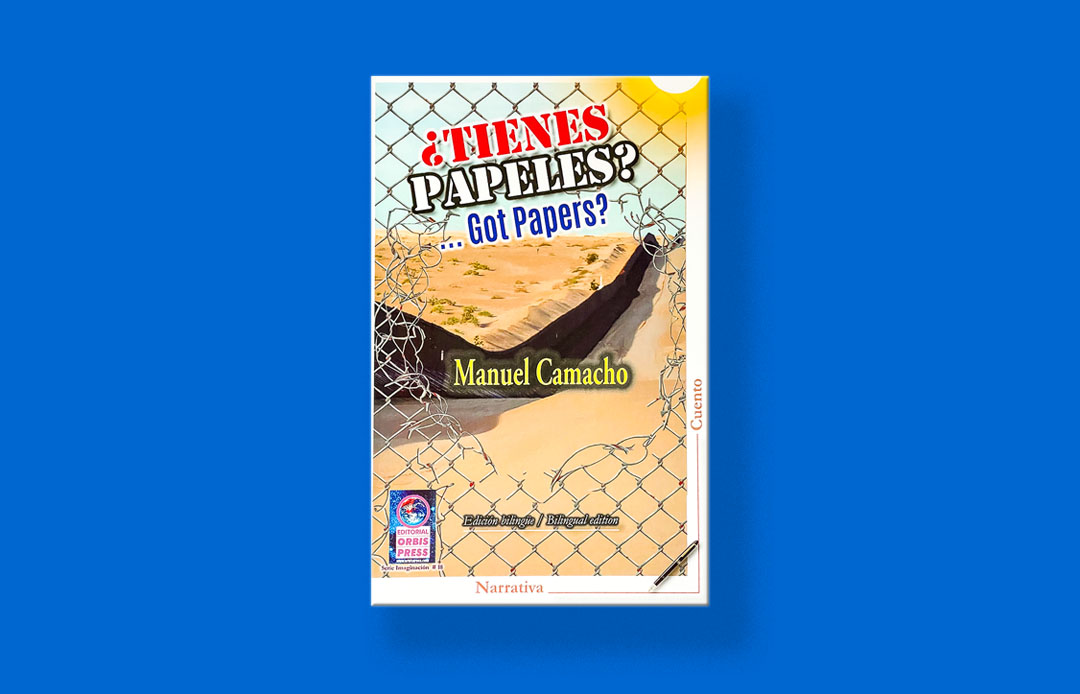 My colleague Manuel Camacho is a Professor of Spanish at San Joaquin Delta College, a regular contributor to the monthly magazine, Joaquin, winner of the 2020 Distinguished Faculty Award, and author in the same year of his first published book of short stories, ¿Tienes Papeles?/Got Papers? (Editorial Orbis Press, Turlock, CA). This stirring, accessible, and powerful bilingual publication so thoroughly engrossed me that I finished it in one sitting. The stories combine comedy, tragedy, and everything in between to show the reader what life is like for someone who crosses the border from a Third World country into the United States. Those of us who have led mostly comfortable lives here have much to learn from a book like this, beginning with the opening page’s invitation to “insert yourself in a truck’s engine compartment, even if parts of your body burn. Or you could attempt to cross underneath the truck and risk falling off at 55 miles an hour” (89). Camacho himself made at least one of his trips into the U.S. underneath a truck, and his stories are replete with authenticity.

As a college teacher of English, I am always looking for books that will engage my students, many of whom are not avid readers. Many of the classic books from the conventional canon simply do not keep them turning the pages. I used ¿Tienes Papeles?/Got Papers? in my English 1A classes in the fall of 2020, and I am delighted to report that it was greeted with much enthusiasm by nearly all of the students who read it. It was by far the most popular option among several that I offered my students. Many students who are learning English after growing up speaking Spanish can benefit from the bilingual feature, as can those of us trying to improve our Spanish.  I will let a few of my students speak for themselves here by sharing comments from their reviews.

Mark Troutner: “This book caught my interest because my grandfather is from Mexico, and I often remember his telling his stories of his adventures from crossing the Mexican border. The title alone was enough to instill the nervousness that my grandfather always felt when asked if he had documented papers to be able to live here in the United States. I have the experience of listening to my grandfather and the hardships he faced with crossing the border and being called a wetback. Camacho turned the tragedy of his experiences into appreciation of where he was going and what he was going to do. He also found the humor [in his experiences], and I believe this is what helped him not become so bitter about the life he experienced.”

Michael Reyes: “In ‘Political Borders,’ Camacho states that ‘These are people at the mercy of traffickers who abandon them in the middle of the ocean and let them drown, while authorities are only spectators watching the absurd drama unfold’ (89). This brief comment about the circumstances of immigrants effectively conveys the situations most immigrants are trying to escape from and their reception at their destination. My great uncle left a war-torn Philippines during a period where gangbangers and warmongering patriots ran rampant. He left a country that placed him at the mercy of these delinquents, [then] faced much discrimination once he arrived in America. Camacho’s story here is equivalent to my great uncle’s own story.”

Adrian Vasquez: “My favorite story is ‘My Blood Stays Here.’ Camacho recalls his days in school through the eyes of Felipe, a mischievous student who often gets punished by his teacher, Profesor Xicote. These punishments consist of whacking his students and dragging them by their ears. Camacho writes, ‘The teacher grabbed him [Felipe] by the ear or sideburn, lifted him up in the air and dragged him around the classroom all the way to his seat’ (92). My father has told me his stories of his days in a Catholic school. He once told me he got whacked with a yardstick by one of the nuns for being disobedient. My uncles have also told me similar stories about their school days in Mexico. I enjoyed this story not only because I related to it [through their stories], but also because it was written with so much relatable humor.”

More from Adrian Vasquez: “Camacho was a busboy in the story ‘Prime Rib.’ Broke and hungry most of the time, he eats the leftovers off customers’ plates. Once caught by a waitress, Camacho ‘in shock . . . did not give her the chance to recompose; I shoved the prime rib into her throat. Without hesitation, she left the same mark I did’ (113). This story appealed to me because I am a busboy at a fancy restaurant. At times when I’m super hungry, I think about eating the food off plates that look like they haven’t even been touched, but [instead] I pass up on the leftovers and go for the fresh chips and salsa. Throughout Camacho’s stories, I envisioned my parents going through the same experiences. It’s astonishing how many immigrants could relate to Camacho’s stories.”

Alexis Len: “Camacho gets to the other side of the border in ‘Do you have papers?’ He writes this story through the eyes of Braulio, who runs into a man who only speaks English. Unable to speak or understand English, Braulio responds in his foreign language. After a whole ordeal with the English-speaking man, Braulio says, “The man told me many things I didn’t understand” (146). This is where my father can relate. Growing up, my father could barely speak or understand English in the States. He was asked a lot of things in English, but could only respond in Khmer. His classmates and other peers would taunt him for his accent and broken English.”

Aislyn Hahn: “This book made me more interested in ICE and border control. I believe that the border control system is corrupt and needs to be changed. Growing up in America, I am lucky I have never had to cross the border like Camacho. I don’t understand the struggles completely because I’ve never gone through them. I am not discriminated against for the color of my skin and the country I am from, but I feel for immigrants who are, such as Camacho. This book also made me realize that immigrants are strong and should be respected more than they are. Discrimination is not good to have at the border, especially when America was built on differences and freedom. I highly recommend this book to anyone who wants to learn more about what it is truly like to have to cross the border.”

Moises Grajede Padilla: “The last part of the book I wanted to comment on is how the people feel after successfully crossing the border. Camacho points out how Paula feels: ‘Paula llegó a la frontera feliz de volver a reunirse con su marido’ (Camacho 54). Here, the moment Paula returns from crossing the border, she is greeted and reunited with her husband. Who knows how long they were apart? The only part that matters is that they are together once again and very happy as can be. This reminds me very much of my father and how he felt when he was reunited with my older brother, sister, and my mother. I can only imagine how it must have felt, especially since my father didn’t really know where or what he was going to do once he crossed the border. Now we are all together and happy as can be.”

Gavin Yacoub:  “I am fortunate enough not to have gone through the pain that the author had to go through, [but] I have family that can relate. My father and his family are from Syria, and they have had a difficult time coming to the United States. I know that he has had a difficult journey, and one of the difficulties was dealing with racism. During the time of 9/11, MENA people faced false accusations of terrorism just because of where they were from. My father lied about where he was from to avoid being falsely accused. It is truly horrible how the United States is the land of freedom, but people are still scorned for wanting to immigrate and escape their struggles. Camacho’s stories give us empathy to try to imagine walking in another’s person’s shoes.”

Almost all of my students made reference to Camacho’s sense of humor, even in dire circumstances. I laughed out loud at the exchanges of dialog in “The border,” when an American officer interrogates Camacho and an “almost cadaveric” companion as they attempt to cross.

My own favorite among the stories is “The Crossing,” where the narrator makes the mistake of laughing in line at the insipidity of questions posed to prospective border-crossers, only to pay a harsh price for his amused reaction. In all these narratives there is raw power, which served to renew this reader’s awareness and appreciation of the privileges I have enjoyed (including no worries about enough meat to eat!) by contrast with this author’s. His book is a testimonial to his own resourcefulness and resilience—and to the achievement of his own American Dream.

Phil Hutcheon graduated from University of the Pacific and has taught at Delta College since 1990. He is the author of four novels, A Child Left Behind (Tokay Press), Rooting for Goliath (Tokay Press), Desperation Passes (Tuleburg Press), and Where Triples Go To Die (Inkwater Press).