Daddy Was a Fisherman

He could fish a mud puddle and come home with dinner.

A quiet country boy, he came from a minuscule town east of Dallas called Forney, which still had wooden sidewalks when I was a kid. It was country.

His day job was an aircraft mechanic in the U.S Navy for over 20 years, serving in Post-war Japan, Korea, Viet Nam, Bay of Pigs and the Cuban Missile Crisis.  Being a career sailor, when he wasn’t on an aircraft carrier on sea duty, we were usually stationed near the ocean, which was perfect for his fishing habit. His therapy.

His job as a child was putting some protein on the table and he usually found it in the local lakes and rivers. He also was a duck hunter, but that was only some years, and only when in season. One time he shot a turkey from the back porch, which was pretty tasty although unlike turkeys as we know them from the supermarket.

While he was stationed in Kingsville, Texas, we had 16 acres and a big pond covering one of those acres, which he stocked with catfish.  He’d string a line and would only bait enough for dinner for our then family of 5.  Fried catfish was a staple of my childhood along with beans, cornbread and biscuits.  Mama had a deep fryer and she knew how to use it, frying up the crispiest on the outside, moistist on the inside, catfish, potatoes, onion rings, okra, donuts and other delights.

But once or twice a week, Daddy’d take the 30 minute drive out to Riviera Beach on the coast to fish. There was nothing there really, just a funky, desolate area on Baffin Bay on the greater Gulf Coast.  We’d heard it used to be spectacular but hurricane Carla came through in 1961 and did the usual category 5 damage, causing all the sand to leave forever and destroying the resort structures that had started to rise.  So now it was just a fishy, decay-smelling mud on the edge of the water with some high rise skeletons on the horizon.  But it was the ocean and that was good enough for me.

I was lucky, I always got to go with him. He was a quiet man, and I was a quiet kid, and since I loved the ocean as much as him, he never had to entertain or discipline me.  My siblings didn’t fare so well, my older brother, Jerry, the delinquent in training, would quickly get bored and find some way to get into trouble, and my little sister Gale, Daddy’s favorite, was a pesky brat and therefore too much trouble.  Baby sis, Jean, hadn’t come along yet.  So unless Mama wanted to go, it was just me and Daddy.

Daddy had somehow met this old fisherman, named Tustin, who lived on the bay in a big old house with his ancient mom.  Tustin had three great attributes, he fished, he was quiet, and he had a good size fishing boat. It was docked on his decrepit pier in front of his house, but we kids always stayed behind on the beach.  One time Dad and Tustin were gone so long, my brother and I caught some minnows and tried roasting them over a makeshift fire.  Not my best culinary achievement.

And then shrimp season came.  Daddy and Tustin netted so many shrimp, big ones, day after day, that they quickly filled up Tustin’s freezer and our fridge freezer. We bought another freezer and filled that up, then filled up Tustin’s neighbor’s freezers then our neighbor’s freezers!  Mom’s full time job became getting rid of all the shrimp Daddy kept bringing home. Every morning she would boil up a big batch and pile them into a huge bowl that sat on the table for all snackers. The world’s best shrimp, all you can eat, all day, day after day, all summer long.  Wow!

Now these were a kind of shrimp that are hard to find nowadays. They were large, but not the jumbos that are now almost all farmed in Asia.  They tasted like the sea and air, a weird kind of fresh, sweet, briny, bottom of the Gulf feeder kind of taste.  Heaven, they tasted like heaven.  In my career, I have tasted some of the world’s best food, created by top chefs in top destination cities.  Every time, shrimp was served, I would get excited, then dampen down my expectations, because honestly, I was always disappointed. The ones that are farmed don’t really taste like anything to me, plus the farming methods are a little scary, and when I did get served Gulf shrimp, they never had that clean, sweet, briny taste and sometimes had a mild petrol aftertaste, alas, a legacy of proliferating oil rigs. I admit it.  I am a shrimp snob. Hopefully, by now, you can understand why.

But on a recent provisions excursion, I found some perfect looking, wild caught, Gulf Coast shrimp at our local market.  They looked so fresh! My husband and I eat mostly veggies nowadays, and I never buy shrimp, but for some reason I can’t explain, these shrimp were calling me.  I had the butcher wrap me up a half a pound, and told him, “every shrimp counts”, so he picked out the best of the bunch for me. I’m thinking Shrimp Fettuccine, but decided that a Miso Soup would better highlight the shrimp.

Well ladies and gents, these shrimp were straight out of my childhood! Once again I was cruising that country road out to Tustin’s, all the windows open, Daddy’s arm was hanging out, holding his beer (that was legal then), and his head was halfway out catching the warm air in his face, sniffing for the sea.  I’m in the back, neither of my pesky siblings are with us, I’ve got a bag full of boiled shrimp and we were headed for the beach!

So if you’re able to find yourself some Gulf Coast shrimp, here is that recipe for the Heavenly Shrimp Miso Soup. You should know that I almost never measure anything.  I also don’t follow recipes and while I love cookbooks, I think of them as adventure stories, not gospel. I make up recipes daily, winning a national cook-off along the way, as I look at what is in the fridge and fresh in the garden.  Make any veggie substitutions you want, just keep in mind the tips below. Most things in this recipe are organic which I recommend for flavor as well as health. 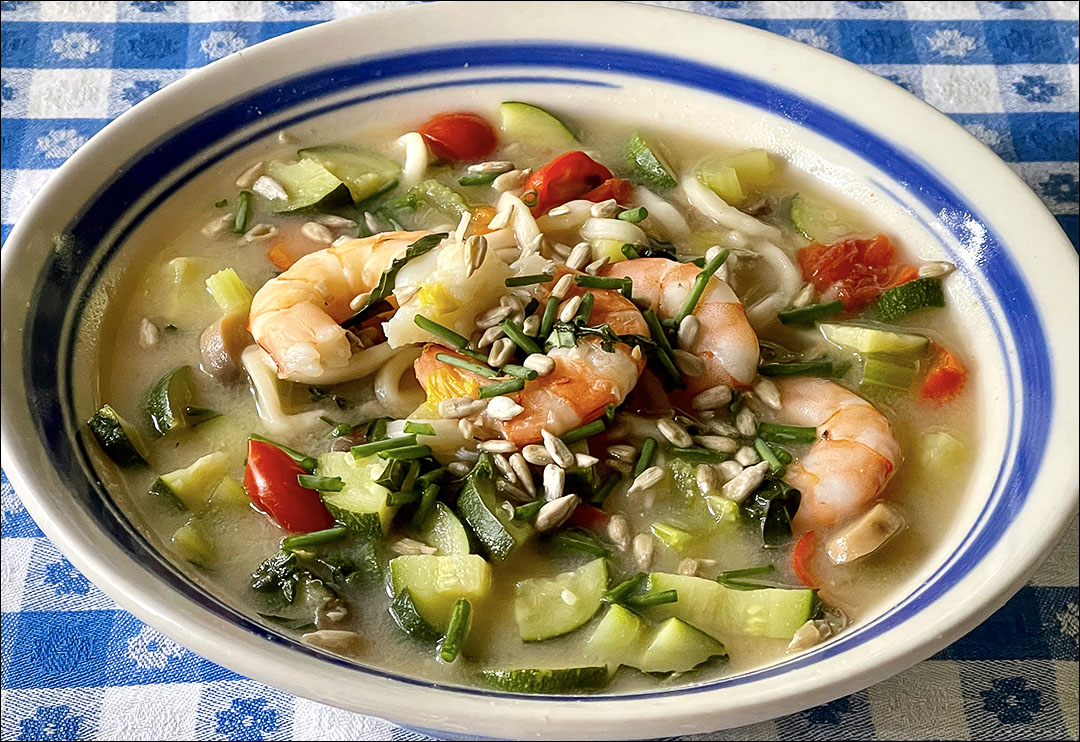 2 tablespoons raw sunflower or other seeds for garnish