Tomatoes in the Delta, Part 2 of 2

Revolution in the Tomato Industry

Part one provided an overview of the canning tomato industry in the Sacramento-San Joaquin Delta region. Here, in part two, we delve into additional fascinating stories about the development of the mechanical harvester and the decades-long effort to breed varieties of tomatoes that would accommodate machine-harvesting.

It’s two stories high, rolls on wheels that don’t seem large enough, astraddle a wide row of jumbled and un-staked tomato vines. It is not streamlined. Gangways, catwalks, gates, conveyors, roofs, and ladders are fastened all over the lumbering rig. Its front end snuffles up whole tomato plants as surely as a hungry pig in a farmer’s garden. Its hind end excretes a steady stream of stems and rejects. Between the ingestion and the elimination fourteen laborers face each other on long benches. They sit on either side of a conveyor that moves the new harvest rapidly past them. Their hands dart out and back as they sort through the red stream in front of them, culling what is not quite fit for pizza sauce—the “greens,” “molds,” “mechanicals,” and the odd tomato-sized clod of dirt which has gotten past the shakers and screens that tug tomato from vine. —Mark Kramer, The Ruination of the Tomato, 1991.

Labor shortages during World War II stimulated interest in the development of a machine to pick tomatoes. In 1949, UC-Davis botanist G.C. “Jack” Hanna began collaborating with Coby Lorenzen of the Agricultural Engineering Department to develop a mechanical harvester for tomatoes. Engineer Bill Stout and horticulturalist Stan Ries at Michigan State University formed a similar partnership in the late 1950s and tested three versions of tomato harvesters. By 1962, several other machines were being tested. Most of these plant breeders and engineers cooperated with each other in the quest.

Machine-harvesting tomatoes involved many functions, such as cutting and lifting the vines, but separating the tomatoes from the vines proved to be the most challenging function to mechanize. Lorenzen and Hanna experimented with fifteen different separation solutions over a ten-year span: shaking, combing, clawing, centrifugal force, etc. It wasn’t until another engineer, Steven Sluka, joined the team in the late 1950s that the separation problem was finally solved. Sluka designed an effective separator that used a set of “straw walkers” similar to those used in combined harvesters for grain.

On September 1, 1960, the prototype harvester with Sluka’s separator was field tested in front of two thousand farmers and other spectators on the Heringer farm near near Clarksburg (southeastern Yolo county). To see film of that historic field test, preserved by the UC-Davis Library, Special Collections, click here.

The design patents for the harvester were granted to Lorenzen, Sluka, and Fred Hill, an engineer at Blackwelder Manufacturing Company of Rio Vista. That company—which had earlier pioneered the mechanical harvesting of sugar beets—licensed the UC patent and began manufacturing the UC-Blackwelder tomato harvester.

A special section of the Stockton Record in 1965 compared the most popular brands of mechanical tomato harvesters. In addition to the UC-Blackwelder machine, the FMC harvester was described as having distinctive “counter-rotating” disks that cut the vines, the Benner-Nawman machine had a single sorting conveyor belt where others had two, and the Button-Johnson harvester had a unique collecting conveyor and was more maneuverable. The Hume Tomato Harvester was also available. 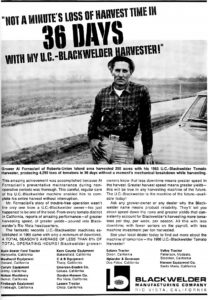 As Carolyn de la Peña pointed out in a blog (Boom California, June 24, 2013), mid-sixties advertisements for tomato harvesters featured growers like Al Fornaciari, of Roberts and Union Islands (east of Stockton), who had mechanically-harvested an amazing 4,290 tons of tomatoes over thirty-six days.

Ernest Blackwelder, president of the Rio Vista manufacturing company, proved to be correct when he predicted in 1965:

We believe mechanical tomato harvesting will eventually mean that we will grow more canning tomatoes in California than ever before, and that this mechanization will give the state’s economy a shot in the arm, for it will not only enlarge this crop, but it will shore up our canning industry. (Lodi News-Sentinel)

Attack of the Square Tomatoes

But wait…. The development of the harvesting machine was only half of the story—probably less than half. Here’s the rest of the story:

To accommodate machine-picking, completely new varieties of tomato had to be developed, varieties that would hold up to mechanical picking and transportation in bins; would set on small, bushy vines needing no stakes for support; would bear oblong fruit that would not roll back down a sloped conveyer belt (hence the “square tomato” nickname); would have fruit that would easily detach from the vine; and would ripen all at once. Whew! A tall order, but UC-Davis botanist and plant breeder G.C. “Jack” Hanna was up to the task, even though developing the right tomato plant took longer and more-continuous effort than developing the harvesting machine.

Hanna began his research in the early 1940s, after the UC-Davis Agricultural Engineering Department had developed an initial prototype mechanical harvester. The prototype kept crushing the tomatoes. Hanna set out to breed a firmer-skinned tomato, using practical means:

He would stand in the fields, walk among the plants collecting random tomatoes, and then go and throw them out onto the road as a test. He kept and rebred from plants featuring tomatoes hardy enough to survive his test, eventually giving us a hardy tomato that can withstand being picked by machine and transported by truck. (DavisWiki)

Early in his twenty-year effort Hanna kept the concept of a machine-harvestable tomato largely to himself, “unsure of what others would think of it. Perhaps for good reason: when his concept started to circulate, it was met with little support, in terms of both its technical feasibility and its anticipated negative impact on California agricultural labor.” (UC-Davis Information)

The first plant crosses made by Hanna led to his release in 1948 of “Red Top,” a first step in the development of a machine-harvestable variety. It was a cross between a large-vined pear-shaped variety and a small, compact-vined variety, but it was very susceptible to Verticillium wilt disease. Ten years later, he and Orson Cannon released the VF6 and VF11, the first multiple-resistant varieties (V stands for Verticillium wilt and F for Fusaruim wilt). That same year, 1958, the first prototype mechanical harvester designed and built by the Agricultural Engineering Department at UC-Davis was tested using Hanna’s “Red Top V9” tomatoes. The hybrid tomatoes, ten years in development, were again squashed by the machine. Hanna went back to the UC-Davis test plots and kept working on new hybrids.

After researching two thousand lines of tomatoes, Hanna finally released the VF-145 in 1961—nicknamed the “square tomato.” I remember it being scorned by fresh market consumers (including my mother), but it was designed for canning, not for the corner grocery store. One factor in selecting this variety was controlled testing by the UC-Davis Food Science Department to assess color, core size, acid levels, fiber, wholeness, etc. The VF-145 variety dominated the canning tomato industry for more than a decade and became the “parent” of many later important varieties of similar type.

The efforts detailed above—combined with simultaneous adjustments made by farmers, trucking firms, canneries, and marketers—constituted a revolution in the tomato industry in the Delta region, a revolution that probably saved the industry in the California heartland. That this transition occurred in ten years is a testament to the inventiveness and dedication of all these players.

To see an informative exhibition on these innovations, including an early UC-Blackwelder tomato harvester, video testimonials by local farmers, and a large-screen video of the entire growing and canning process, visit the San Joaquin County Historical Museum.

David Stuart recently retired as the executive director of the San Joaquin County Historical Society. Previously, he directed the Sacramento History Museum, the Sacramento Science Center, and museums in Ventura. His family settled in the Delta in 1860.