My fondest recollections of Basic Training were chow, calisthenics, drills, and parades. However, I excelled only in chow. I remember going to lunch that first Sunday in camp with a soldier friend from Kentucky and afterward saying how surprised I was that the lamb chops were so delicious. “Those aren’t lamb chops, they’re pork chops,” he informed me. From then on I ate everything.

The rifle range was not my best shot, as somehow the phrase “kill or be killed” never caught on with me. I did, however, discover that target practice was somewhat sexy, since every time I fired a shot, the sergeant hollered out, “Maggie’s Drawers” – a reference to a large white flag that looked like bloomers and was waved wildly by an observer when the target was completely missed.

Off-time was best because then I could go to Baltimore, a city like none I had never before seen. The row houses with their front stoops and the old buildings of red brick intrigued me. I walked around, taking in every new sight, sound, and experience and relishing it all. I attended parties at the USO and services at the temple which led to more parties. I was fascinated by the Pennsylvania Railroad trains, which whizzed by so fast we were warned not to stand too close as the speed of the trains creates a vacuum that might pull you right onto the tracks.

One weekend, a fellow soldier took me home to his family in Rochester, New York. They were all so warm and hospitable it made me a little homesick. He took me to a company dance, where he introduced me to the greater family of Kodak Camera Company. It seemed to me that everything in the city centered on the company store, and everyone loved it.

The racial segregation in the South was unfamiliar to me, as I had never been exposed to “separate but equal facilities.” While riding a city bus in Baltimore on a weekend pass, I offered my seat to an elderly black woman. She would not accept and I was read out by the driver who called me a troublemaker and suggested I either sit back down or get off the bus. I told him about all Americans being equal and got off the bus. I can’t say that my action meant anything to anyone but me, particularly since the woman continued to stand, However, as I walked away and watched her and the bus go by, I felt about Ten Feet tall.

After the eight weeks of basic training were finished, a sign-up sheet was posted in the barracks for all Enlisted Reserve Corps personnel, so inclined, to join the Army Specialized Training Program (ASTP) which was designed to extend Enlisted Reserve status during college. This was the deal: the Army would assign you to the school of its choice where you would always be available for immediate call-up. I didn’t opt for this as I had already been selected for Clerk Specialized Training School on the other side of the base. Having experienced the fickleness of the Army,

I figured that taking risks with its future decisions would be foolish. It proved to be a good choice because many of those who went into the ASTP program were pulled out not long afterward and sent into the ranks as replacements. Many went into infantry units, and, as in the case of my friend, Bud Marks, into the medics.

In the clerk training program, I learned to type and graduated out as a clerk typist in supply. This certification proved to be quite advantageous.

The rumors began to fly. We were all going to ship out, and the smart money said we were destined for Shenango, PA, where we would board a ship, probably to Africa. This meant that the fellows who lived on the East Coast could see their families before going overseas, but we from the West Coast could not.

The night I heard about our impending journey, I was sitting in the dayroom and told the fellow sitting next to me how bad I felt that I couldn’t see my folks before going overseas. He asked me my name and serial number and told me he worked in the office where the orders were cut and that he’d see what he could do.

The next day, I was surprised and happy to learn that I had orders to go West to Camp Young, at Indio California, for Desert Maneuvers. These maneuvers were designed and instituted by General George Patton who had originally set up and commanded this huge military exercise but had since left to lead his army to victory in Africa.

So, as a soldier in search of other places to conquer, I left Aberdeen, MD, and returned almost home, to Indio, California, for desert maneuvers with General Patton’s Army. It was there, at Camp Young, that all the maneuvers’ stringent rules came into play. The most memorable one was to “sh-t, shave, shower and shampoo” every day using only one canteen of water – a nearly impossible feat in the desert heat.

I joined the 478th Tank Evacuation Company, a newly created organization modeled after German General Rommel’s modus operandi, in which disabled tanks were winched up on low bed trailers and pulled by armored tractors to the rear to be repaired and returned to battle. The first cabs of these tank-evacuation behemoths were open with a removable canvas top, but later models had a cab which, as I recall, was large enough for a crew of four or five, which included a driver, navigator, radio operator, and one or two mechanics. I believe the 478th was one of the first companies of this type in the U.S. Army.

I went on only one or two of those practice runs, but, it is my recollection that I endured the heat and the water rationing moderately well, and on these maneuvers, I was introduced to the Lister Bag. It was a canvas bag suspended below a tripod and contained water which was treated with a horrible-tasting chemical.

I also remember the combat training which caused us to travel on our bellies under live machine gunfire. I can’t believe it was live ammunition since I wasn’t killed.

My family used its gasoline ration to pay me a visit. This caused me extra anxiety on the range since I had to worry that, one, I wouldn’t keep my head down, and two, if I didn’t, I would miss out on all the delicious home-baked goods that I knew they were going to be bringing—Fortunately, I lived.

It soon came time for us to leave behind the desert, the sagebrush, and the snakes and we were moved to Camp Cooke at Lompoc, California, where again my folks came, along with a couple of my cousins to visit me. We had a great time, and, as usual, they came with boxes of even more exotic things to eat. My buddies in camp loved it when my family brought or sent me “care packages,” as we shared and shared alike. (All during my army experience I received these packages which were put together by members of the family at weekly sessions and sent to Uncle Mike, Uncle Al, Irv, Hillard, and myself.)

Shortly after my family’s visit, I got a one-week furlough and boarded a Greyhound bus for a hot, crowded ride home to Stockton.

Although I had only left my hometown a short time ago, it didn’t seem the same. It was a strange feeling. Maybe it was the fact that I had been away – kind of on my own – or maybe it was the gnawing knowledge that when I left again, I wouldn’t know if I would ever return. There wasn’t much time to think about it because the next afternoon I got a phone call to return to Camp Cooke. My unit had received orders to leave. So, smothered with hugs, kisses, and tears, I, once again, left home and joined my comrades in arms. I returned to Camp and we boarded a train to Fort Dix, New Jersey, where we awaited orders to board ship.

Waiting days were days of inactivity, except for the marching, which the Brass came up with to keep us in shape.

During this waiting period, a group of us got passes to New York City where we stayed at the New Yorker Hotel for $6.00 a night. We took in the Stage Door Canteen and enjoyed being entertained by the famous USO entertainers, big names all. We also bought and sent home presents from Macy and Gimbles’.

We fellows from small-town America were blown away by the size of the department stores and even more so by Grand Central Station and the Empire State Building. Our necks craned ever upwards, and while awaiting our orders to board our troopship, the USS Argentina (which we were told had originally been the President Harding of the American President Lines, and had been plying the seas off South America before being brought into service as a troopship).

Bombarded with rumors and quasi-facts of all kinds, we concluded that we were headed for Africa to join General Patton’s army. However, it turned out that the African campaign was winding down, so our convoy turned mid-ocean and sailed to England.
### 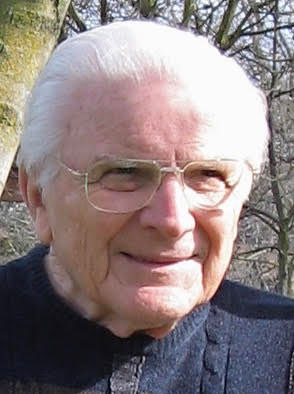