When the Wind Blows

From the Files of the Delta Detective Agency 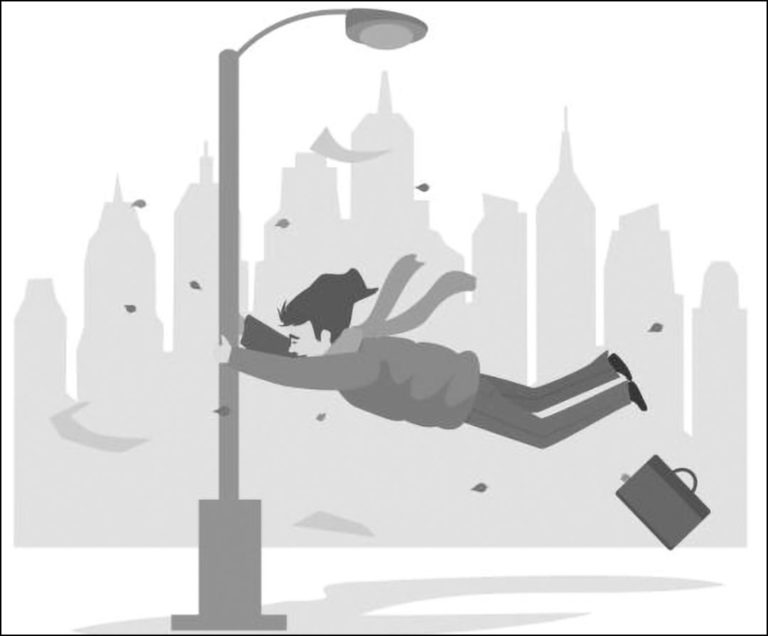 I’d heard the phrase “A crime against nature”

more than once in a courtroom of law,

but never : “A crime committed by nature”

until the April days when we were attacked

and whatever else Mother Nature could throw at us.

The last gasp of winter was more smash than gasp,

damaging not only our Delta farms, fields and crops,

but the coherence and confidence of Femmes Fatales,

a ladies’ writing group that I served as technical advisor

in matters of crime, mystery and detective investigation.

As the great storm continued its merciless havoc,

the Femmes began calling me to complain

they were losing what they called “the creative process”

and asking how to solve their mysterious affliction.

After all, as one put it, “Even the birds are floundering,

losing the confidence of wings and the mastery of flight.”

The birds weren’t the only ones who’d fallen victim

to the turbulence that showed no sign of slacking

and led fire-and-brimstone preachers to proclaim

the end of the world was at hand.

“I’m absolutely at a loss for words!”

for a storm-induced case of writer’s block

“and a Raymond Chandler special cocktail or two,

but now I’m at my wit’s end, or very nearly there.”

Next came Lucinda, who said she’d given up

her novel in progress and all hope of being

a writer commended by influential critics

for being “creative, engrossing, irresistible”

in order to feel admired, esteemed and fulfilled.

Elsa’s mind had gone “blank as my bank account”

waiting for inspiration that never arrived.

“It might be my nerves, but who wouldn’t be

nervous with all this insane weather

and all the renewed Covid cases

and the horrible, unforgivable war launched

by that genocidal madman in the Kremlin

who ought to be boiled in his own borscht.”

Jasmine said she would take her leave

with an extended stay in a Caribbean Margaritaville

or sleepy puerto where she’d write nothing at all

beyond “pretty postcards” and mingle with other

and its problems behind to devote themselves

to tropical trivia and the pursuit of pleasure.

I tried to reassure angry Mrs. Barkley, who condemned

“The cockeyed day I’m having with this hellish weather

and my greedy landlord raising my rent again

and my cleaning lady stuck on the side of the highway,

waiting out an attack of bullet-like hailstones.”

“I can’t tell you how my writing is going,”

Myrtle replied to my sympathetic inquiry,

“because it already went, leaving me flat,

leaving me nothing except wondering

what’s happening to this world of ours

and dreading whatever is coming next.”

Next? Well,  that was the question of the day,

despite all her reasonable precautions

“And, all right, maybe one party too many.

But you can’t think of everything can you?”

of thunder grew louder and closer

until my neighbors’ fearful child

I reached the breaking point of patience and tolerance

when Felicia insisted on telling me how, despite all,

she’d devised : “A plot to put me back in the game.

Here goes: a stranger with a gift for impersonation

steals your identity, assumes your name,

usurps your personality and goes about the world

pretending to be you, doing it so convincingly

that even you begin to suspect

you’re not really who you pretend to be…..”

The grievances and impossible plots

kept rolling in until I had no choice

but to instruct Iris not to forward any calls

except those essential to business and profit,

whereupon she forwarded a call from Yolanda Maria Esmeralda Peralta

inviting me to review her plan for celebrating

Cinco de Mayo with a menu of caldo de piedra,

What better way than a foodie fiesta to salute spring

and nurture the inspiration my mystery scribblers lost

in the swirling mega storm? Here was a solution

that would restore heart, soul and the courage to write.

A retired reporter and editor, Stockton resident Howard Lachtman has written Delta-centered detective stories, Stockton Civic Theatre reviews and a variety of baseball tales for Soundings. In 2006. he was honored by the Stockton Arts Commission for “24 years of superior review and commentary on the performing and literary arts in Stockton.”

PrevPreviousThe Skin of Our Teeth
NextCalifornia’s Drought – Is There a Plan?Next