Cuttin’ the ‘Gras, Then and Now

What’s your first experience with asparagus? Here’s mine: Disenchantingly gray-green, lifelessly limp and nothing like its picture on the can’s label. As a child I didn’t like asparagus. It simply did not appeal to my young self even though I was one of those kids. You know, they’re the ones, the minority, who actually liked spinach, broccoli, brussels sprouts, and the like. Asparagus, though? NO WAY. Well, it was the canned variety; I don’t remember ever seeing the fresh version in my small-town grocery stores in the 1950’s. But I didn’t grow up on the edge of the California Delta, either, where, for many decades, asparagus was one of the king crops and anxiously anticipated every spring by locals as well as the rest of the world.

Fast forward to the Mid-seventies when I moved to Stockton.

As my first spring-time in my new city grew closer, I noticed people talking about the coming asparagus season like they were talking about the beginning of baseball season or something. No, they were wondering which local stores would have the freshest spears of locally grown ‘gras – the locals called it ‘gras.

Of course, I’m wrinkling my nose and wondering what what the big deal is. Why the buzz about that slender, limp vegetable that my childhood self just would not eat? I don’t remember the exact occasion of my first taste of fresh-from-the-farm asparagus but I do remember it was simply steamed al dente and unadorned save for a pat of butter melting over it. I was smug in the knowledge that, even though this did not look like the scary stuff I remembered, I would not enjoy it.  Boy was I wrong. Now I get it, that eagerness of looking forward to seeing the first batches in the local produce aisles – better yet, buy it fresh from the local packing sheds – and having it readily available for a couple of months or so.

A few years into my photojournalist job at The Record (Stockton Record then), in April of 1978, I catch an interesting assignment. Staff writer Dick Clever was doing a story called, “The Old Timers”, about a group of Filipino ‘gras cutters, some well into their seventies, who had worked together for decades.

In the pre-dawn overcast darkness of Robert’s Island west of Stockton, The Old Timers gather in a farmhouse for a hot breakfast before heading out to the fields. As the light in the east attempted to pierce the threatening sky, the cutting began.  Barely able to see anything against the moist-black peat soil, I wondered how the men could not only work in those conditions but work at such a quick a pace that I found it difficult to keep up with them even though many were twice my age or more.

Adding to my misery, I was gaining height and weight with almost every step. It had rained a bit overnight causing the thick goo to stick to the boot soles. I got taller and heavier, too, needing to periodically scrape off heavy layers in order to continue.

That was then, this is now. 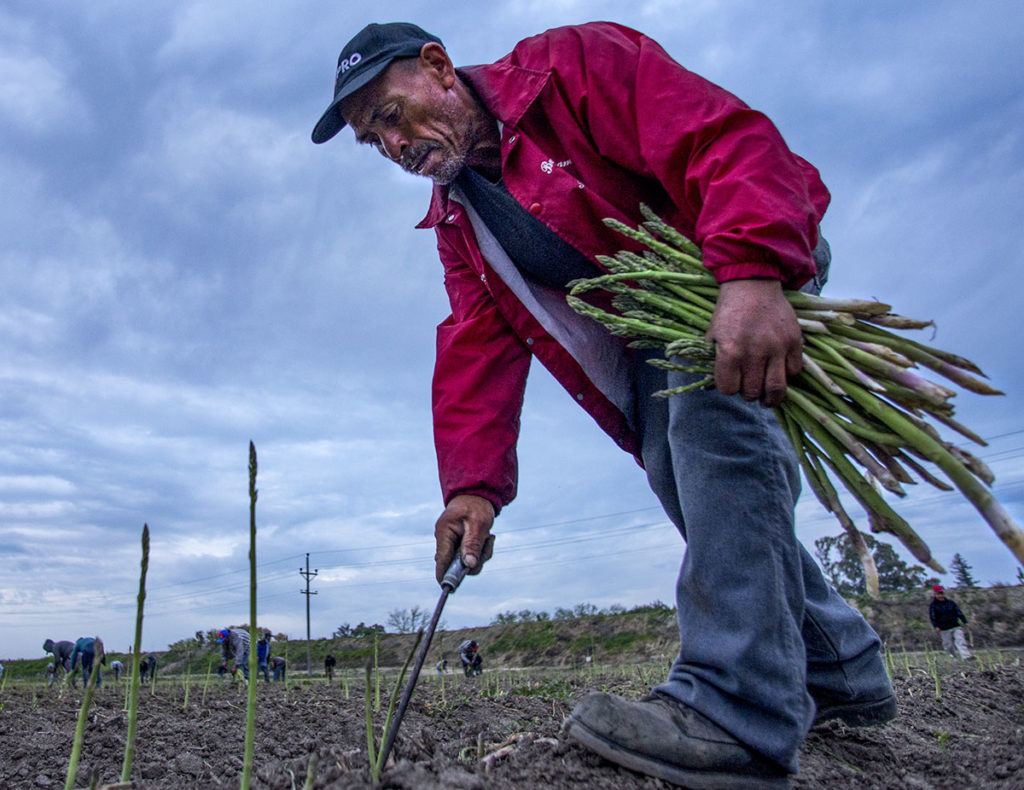 In recalling my challenging day in the fields back in 1978 I decided to see what, if anything, has changed in the years since and get a few pictures. 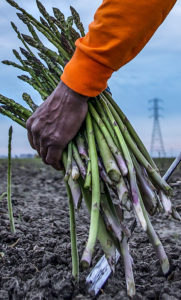 What hasn’t changed is the fact that this fragile crop can still only be hand-harvested.  It takes experienced workers to select which spears to cut and all the steps from field, to sorting and to packing are done by hand.

What has changed isn’t good. Bob Ferguson, a Delta asparagus grower who allowed me access to his fields for photographs during the 2017 harvest, tells me that some mechanical harvesters are in development but they still are a long way from perfection and they are prohibitively expensive. “California agriculture continues to flex and adapt to the new challenges confronting the industry. The asparagus industry has had to do the same but with a scalpel knife. In just the last two years the number of acres in California has substantial decreased while our foreign competitors continue to increase their production. You simply don’t farm to just brake even or lose dollars and 2017 was an indicator as to where the industry was going; in 2018 we felt the full impact. We could no longer compete with the foreign competitors because their costs were a quarter to a third of our costs. And when your buyer is not willing to pay more for California asparagus because he can buy it cheaper outside the country for a better profit, why buy local?”

“The 2019 asparagus season is about to start,” Ferguson says. “At last count there were two growers left in the Delta. That’s it! No more. They represent a far cry from the acreage that was so productive in the 50’s and 60’s. Our one big hope was to have a mechanized harvester. Remove the hand labor and mechanically harvest the product and then have it mechanically sorted at the packing shed. Cut the costs. The challenges with such a machine never came to fruition.  Maybe some day?”
According to Eileen Nichols Christin of Victoria Island Farms, California had about 28,000 acres growing asparagus in 1991 with the Delta representing about half of that. Now, the California Asparagus Commission estimates that only 9,000 acres remain, if that. “It will be less next year”, says Christin. “We hear they are taking out asparagus in the Salinas area as well. NAFTA changed everything. A 15% tariff was charged on Mexican asparagus imported into the U.S. prior to NAFTA. This began to phase out in 1993 and was eliminated entirely by 1998. We have heard that Mexico now pays (laborers) $10 per day. We pay $10 per hour minimum, often up to $20 per hour or more with piece-rate plus medical insurance etc. So, harvesting prices are much higher here and we couldn’t find enough people to harvest. Food safety costs were on the rise, with required audits, additional package labelling, recall planning etc. And customers were not willing to pay enough of a premium for California Grown asparagus. Our average price was the highest ever last year by a large margin. Unfortunately, it wasn’t even close to being a breakeven price.”

Asked what has taken the place of the historical crop that was first cultivated in the California Delta back in the 1890’s, Christen replies,  “Processor tomatoes, grapes, and almonds.”

With a high degree of certainty we can expect our national pastime to return every spring.  Unfortunately the future of California Delta grown asparagus is decidedly less of a sure thing.

This story opened my eyes to a few things: From seed to the first full harvest, asparagus is in the ground for 3 years. The crop is a very labor intensive as no fool-proof methods have yet been devised for mechanical harvesting of the fragile spears. Asparagus can grow as much as 4 to 5 inches a day, meaning the same fields can be harvested every couple of days for 8 to 10 weeks. About 70% of the cost of asparagus production is labor.

PrevPreviousThe Further Adventures of the Delta Detective Part 3 of 4
NextAsparagus: Historic Signature Crop of the DeltaNext