It Takes More Than Bombs to Close This Pub

A Yank in England - 4th in a Series

I suppose it’s OK to tell you, right off, that in the fall of 1943 we GIs on the troop ship, “USS Argentina“, made it safely through the dangerous waters of our trans-Atlantic crossing.
After those 12 days and nights of apprehension, wondering whether we’d be torpedoed or not, we finally arrived in England – Liverpool, to be exact. But, in 1943 that was top secret. A soldier’s whereabouts was a P.O. box, and, according to the Army, that was where he was. The Army post office knew, and, of course, “Kilroy” knew, because “he was there”. (“Kilroy was here,” alongside a drawing of a long-nosed, bald fellow peering over a fence, was a rallying emblem during WWII signifying that wherever you were as a GI, he had already been there.) 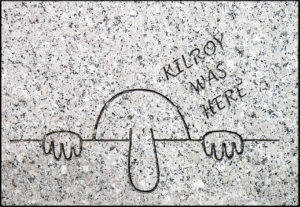 My Uncle Al, a GI already in England, knew when I arrived and sent me two pounds Sterling. During my whole stay in England and France, I was never very far away from him, and we visited many times in both countries.
After my arrival in Liverpool, I boarded a smelly, coal-fired train to Thatcham, Berkshire. There I would spend the next 10 months getting ready for the planned invasion and liberation of Western Europe.
When I say I’ll never forget that train ride, I refer to the food. The Red Cross served us donuts and coffee, and the Salvation Army introduced us to meat pies, which I ate with relish (pun intended), until English friends later told me, “Do you know what’s probably in’em? Ears, snouts, and Lord knows what else.” All the same, they tasted pretty good with a “cuppa” tea.
Finally arriving at Thatcham, we were trucked to a huge expanse of undeveloped land, dotted with a few Quonset huts. There, we were assigned to, and fell into, our bunks for a good night’s sleep. In the morning we were told that we would be building a depot for the storage and issuing of vehicles, and were handed picks and shovels. We loaded a never-ending series of dump trucks which headed back to our newly designated depot. There, another crew would spread the gravel to make the area suitable for storing a huge number of GI vehicles. 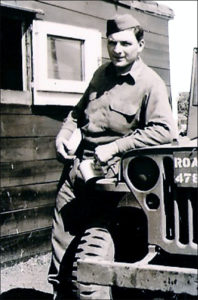 The kinds of vehicles we were to store were Jeeps, GMC “Jimmys”, cargo and weapons carriers, shop trucks and even Ducks, which were amphibious vehicles. Combat vehicles were stored in a similar depot further south and closer to the Channel. Our little depot then acquired a name – “Sub depot O641”
There were three towns within our normal pass limits: Thatcham, Newbury and Reading, the latter being the largest of the three. On longer leaves, we could go into London and other places of interest.
After the vehicles were received, including those of other Allies, as well, they were made ready, entailing the removal of Cosmoline, a heavy, dark grease packed around all the moving parts to protect them from the salt water aboard the ship. Once serviced by the light Maintenance Company, attached to us, vehicles were set in place, ready to be picked up by the units to which they were assigned. Although the troops and vehicles came over on different ships, I can’t remember a time when either the vehicles or the units did not survive the crossing.
We were housed in the Quonset huts (like metal drums cut through the center and placed on the ground with the round side up). In the middle of each hut was a coal-burning potbelly stove, which broiled you if you were close, and which you barely noticed if you were a few feet away. The odor of burning coal – whatever that chemical formula is – was always in our noses and throats, but we got used to it after a time. As my Uncle Ernest in San Francisco was prone to say, “You can get used to anything … even hanging.” 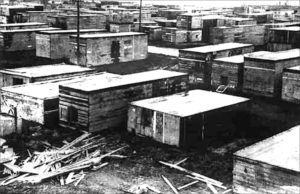